Hi Folks- The latest video is publishing to the YouTube channel as I write this; should be done in… 10 minutes… 9 minutes…

It will be found at:

Did you typo the title?

If you mean the ‘libre’ in the title, no, the EHR’s full name is given in the title; in the video I call it ‘Libre’ to save time.

It’s kind of like in 1997, Rep. Pete Stark (D-Fremont) introduced the “No Private Contracts to Be Negotiated When the Patient Is Buck Naked Act”, a bill that became known as the Stark Naked Act. Ref: 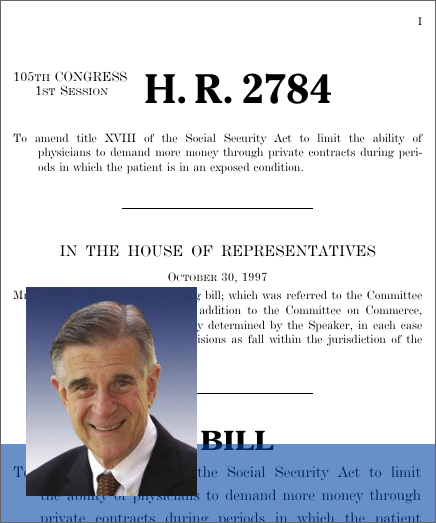 No Private Contracts To Be Negotiated When the Patient Is Buck Naked Act of...

To amend title XVIII of the Social Security Act to limit the ability of physicians to demand more money through private contracts during periods in which the patient is in an exposed condition.

I have notice a number of domestics referring to the EHR application as “Libre”. That becomes confusing for me when they use the exact same name for their word processor suite, but the imprecise nature does not seem to phase them.

As far as MY habit is concerned, I only use it to save tongue-tying time in the videos or (maybe eventually) space in a document, having previously given the full and correct name at the top of the vid and/ or in the title.

If I said the words, “LibreHealthEHR” in the videos every time I referred to the EHR they’d all exceed YouTube’s time limits…

Totally agree. Waaay too big of a mouthful. Two syllables is the limit for that.

@htuck – your work has been top-notch! Keep it up!

Thank you Sir! Happy to support the Cause, and I’ve been having fun at it too.

And the next one, ‘LibreHealth EHR Prescriptions,’ was posted moments ago; look for the link in ‘EHR/ Documentation’