It WORKS! You still have to run some extra .sql files manually for data resources and configuration, and I have not yet published test database inserts to run with it, as I feel that those (and possibly other things) should go in a separate repo, but it seems fully operational. There are file upload tools and the like that are quite handy in an educational or external reporting tool instance, and would be very nice in the clinical installations, but should be checked for security. 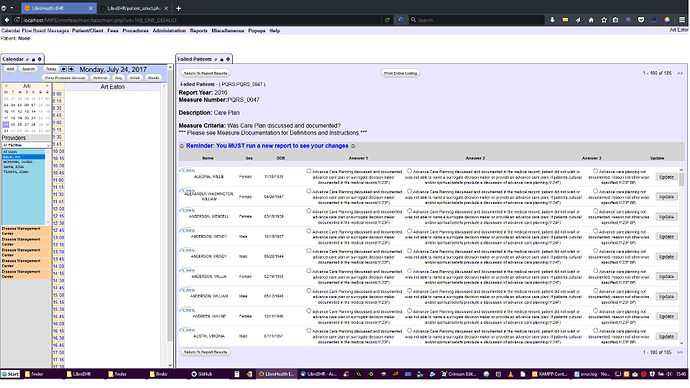 Should demos be updated?

No…the PR is still in review. “Early Adopters” can play with it, and I will host a populated demo on one of out machines here, but it may take a bit to merge it into master.

Jus ping me when you’re ready!

Where can one test it ?

It is not up on a public server at the moment. It might be a couple of days before I can do so (I can’t remote into my web server from here).
In the meantime, one would have to install it locally from that branch.

OK, now for a totally unofficial but permanent demo/testing/training server:

This is a “burner” server. Please create your own fake user account if you like, but use no real names etc.

The database currently loaded is for Disease Management.

The server can be remotely administered, and anyone wanting access may do so. It is all alone on its own IP, and can be used for whatever anyone may need.

-Yes, I know that “demouser” looks more like de-mouser than demo user.

any reason why we can’t host this on the EHR server?

No. No reason someone can’t.

Hopefully this module will make it into /master and it will be on the EHR server. Right now, This server is just an easy access point for folks that don’t have either direct access to the official server, or want to put up temporary stuff. It is a windows box, which means I and other folks that can’t ever seem to get things working right on a linux box can get something done in a few seconds and make problems go away and demonstrations immediately possible.

Personally, I need somewhere I can post my PR branches, fully set up with a test data case (yes, with phpmyadmin accessible from localhost remote) and then tell potential reviewers where they can go to test things out and even examine the logs.

I can also make installer packages available for download…and be able to update them properly and quickly. Once someone has got all that potential future magic automatic deployment and package update stuff going, perhaps this wont be needed anymore. In the meantime, I want to be able to do business. This isn’t an official LH thing, but it is the only way I have of getting this particular module demonstration going for Dr. Hoyt and others to look at. The end of August is something of a deadline for having some EDU stuff ready for Bob to be able to show interested parties.

As it will not be an officially advertised demo, it need not be stable. The official demo stuff needs a certain…dependability.

Great. Could not login with admin and password as I did on the regular demo

Thanks. I can see the reports but still have a considerable learning curve. I suspect (but could be wrong) that the only university that would have great interest in this is the one with the HIM program. That being said, there might be an entirely new and different audience that would be interested in MACRA/MIPS training. Not my area of expertise (yet)

Someone who knows what they want for the software dropping it into the htdocs and setting it up. …know anyone?

I never said no definitively, I did however say to explore options. GitHub wiki allows anyone to edit and hides the git stuff. You could even edit via the github UI easily for a readthedocs site too.

I make my living with code, The documentation is important.

We are just trying to make a spot for Customers to learn how to use the software and contribute to the documentation.